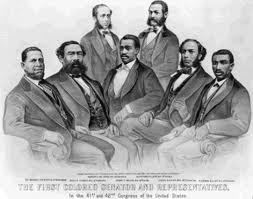 Posted on February 11, 2013by The Myrtle Beach Diva

So now that we’ve had a brief history of African Americans in politics, let’s take a closer look at the progression of the black race as a whole.  In the early 1900’s Jim Crowe laws or Democratic color codes had taken almost all of the wind out the sails of the ex-slave population to seek out high political achievements.  Many became complacent and just happy to have a piece of land to tend or the freedom to make an actual wage.  Northern states were easier to live in with dark skin.  Many made the transition into the industrial age by way of relocating their families from the cotton fields of the south to machine driven cities of the north.  My great grandmother Mary was one of them.  She left the fields of South Carolina to marry a man who work in a tobacco factory in Winston-Salem North Carolina, known to most today as R.J. Reynolds.  She was called all sorts of names for moving away and was always shunned when she brought her family back home to learn their roots.  The other local women and family felt that my great grandmother was just another “uppity negro” who had moved to the city and now thought she was better than everyone else.  The hatred of the African American race within itself is quite fascinating.  I see no other race classify themselves as we do with our skin color classification.  Light skin versus dark skin was not only a huge debate in the south, but apparently everywhere you went between 1900 and 1970.  The preference of the lighter skinned Negro by whites caused great division in the African American race.  So many female slaves had been impregnated by their masters and this resulted in change in the skin tone of their offspring for generations.  For those who were biracial, the hardest task in life was being accepted by society.  Whites didn’t like them because they were black, and their own race had ousted them for “passing”.   (A term that meant “pretending to be white” in an attempt to blend in.)

So for years not only were blacks fighting an oppressive race for equality, they too were guilty of hating each other for the very thing they were hated for, the color of their skin.  It would take some serious reaching to put out the accusation that the internal divide was put there on purpose, but I’m almost certain that we can connect the dots to prove that it was capitalized upon.  It is my personal opinion that the African American race has been slow to evolve due to its inability to unite on more than just a single issue.  A report in 2010 showed that “a majority of blacks (52%) now say that blacks who cannot get ahead in this country are mainly responsible for their own situation, whereas only about a third (34%) say that racial discrimination is the main reason. Fifteen years ago, most blacks held the opposite view.” (Pew Research Social & Demographic Trends, 2010)  It’s crazy the difference a President can make.  For some, just the election of a black President is enough to quiet the anger of centuries of oppression according to the Pew Research Center.  It’s a good thing their numbers are based on a small telephone survey conducted on less than 2500 people.  Although the Washington Post has been questioned on issues of accuracy in the past they couldn’t have been more on target with an article published in 2012 about incarcerated African Americans.  Just when you thought it was time to let it go and move on, outcomes another dirty little secret of oppression in America.  “In 2008, when 19 percent of young black men did not finish high school, black male dropouts were more likely to be in prison or jail than to be employed.” (Pettit, 2012)  Well, the President brought hope of change, but not much change itself.  “There has, in fact, been no improvement in the gap in high school graduation rates between white and black male students since the early 1990s. On the contrary, the gap in high school completion has hovered close to its current level of 11 percentage points for most of the past 20 years….But if you include prison inmates, the estimate of the nationwide high school dropout rate among young black men is actually 19 percent — 40 percent higher than conventional estimates suggest.” (Pettit, 2012)

Some would argue that slave shackles have just become invisible, and can only be seen again when a slave breaks the Master’s rules. If this becomes an actual belief of the majority out there it has the potential to become devastatingly discouraging.  Because if it’s true, then the shackles are not reserved for just the African American race, but for all races that don’t have the ability to rise above the class system.  If we look at facts and figures one might be able to argue very little if any progress for blacks as a whole.  But if we take into account all of the freedoms that we share as Americans we have no choice but to admit that this life is what you make of it.  The only true enemy we have is ourselves.  Perhaps 100 more years will have to pass before mankind can realize that peace can be achieved as long as we aren’t trying to achieve it by breaking the will of others.  I know in the 1960’s hippies preached the whole peace and love campaign, but they may have been on to something.  Just too high to know how to put a plan into effect.  I can only hope that race can dwindle as a factor in society but my hopes are most likely in vain as its human nature to form groups to dominate other groups.  A vicious cycle that carries more momentum than one person can stop alone. Pettit, B. (2012, Nov 13). The Root DC Live. Retrieved Jan 20, 2013, from http://www.washingtonpost.com: http://www.washingtonpost.com/blogs/therootdc/post/black-progress-not-when-you-include-the-incarcerated/2012/11/13/1412b6b2-2da0-11e2-9ac2-1c61452669c3_blog.htmlPew Research Social & Demographic Trends. (2010, Jan 12). Blacks Upbeat about Black Progress, Prospects A Year After Obama’s Election. Retrieved Jan 20, 2012, from http://www.pewsocialtrends.org: http://www.pewsocialtrends.org/2010/01/12/blacks-upbeat-about-black-progress-prospects/