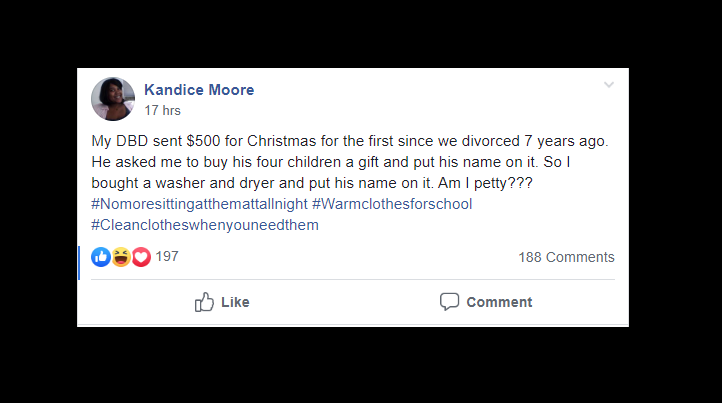 I didn’t realize that I would find myself defending how I spend my child support to the world this morning, but I feel it’s necessary to do at this time inspire my fellow single mothers.

My readers and friends who know me personally also know that I’m not the type to vaguebook and bitch about my problems. So not many people actually get to see the “magic” behind the curtain of “I don’t know how she does it.” I have five children. I’m single by choice because I feel as a mother, the only free time I have has to be focused on my children. Not building a new relationship. I spent 9 years as a wife and stay at home mother in a toxic and abusive marriage because I thought it was the right thing to do. You know, commitment and all that jazz. I mean seriously, he was a war vet with PTSD. I was supposed to “stand by his side”. Eventually, as all of these domestic violence paths go, I came to the crossroads of either my life, or my marriage. So I fled with my children.

I’m not going to sit here and boast about how I left our home with no shoes on my feet in the middle of the night but still managed to work my ass off and fight my way to living in a pleasant apartment just three blocks from the beach where I sleep peacefully every night knowing that we are safe. I did not do this alone, I had some help along the way. But I do want to make it clear, that most of this hard work, was me. I went from having no job to owning two independent contractor businesses and running this little website here that makes me a little change in just a few years. I say this because I want you to understand that my kids do not go without. Nor am I dependent upon the government. I’m not rich by far. Like most of you, I’m one missed car payment away from homelessness. Which the kids and I have also experienced on this 7-year journey. However, by Grace, our heads are above water right now, and we’re in a good place. Which brings me to why I’m even writing this blog post today.

One day, I’ll tell my full story. And it’s a good one. But for now, I want to address a post that I made in a Facebook group that is getting quite a bit of attention. Check it out below:

I joke a lot on Facebook hence the petty comment and the hashtags so, I really felt like this would get a big laugh more than anything. And yes, that’s the gospel. I did spend some of the child support on the washer and dryer. I’m proud to say I got a great deal for the pair @ $300.00 however, FB commentators would rather believe that I’ve made it this far without being savvy enough to know that you don’t spend $500 dollars on a used washer and dryer set and that anything new would have cost me twice that amount. But I’m not writing about smart money right now, that’s over here on this page. Today, I want to address the comments that suggested I was stealing from my children.

First, allow me to explain where I posted this. I joined a group about dead beat dads a while back because I was really feeling the stress of paying for everything on my own. If you’re living this life then you know how one mishap quickly escalates into a series of unfortunate events. Out of respect for him and the group, I will not disclose the name of the group and for the sake of his privacy, I will address him as “He”. He was hitting the double digits in the thousands in arrears. I was having to choose between being late on the car insurance payment and end of the school year field trips. Four of them, plus one elementary graduation, and what the hell to do with them for the summer. I think that’s when my dryer quit too! I needed a place to vent and this group has given me that opportunity.

Every now and then we have people come into the group that try to chastise us for venting or even airing out honest feelings that frankly the world feels like we’ve brought upon ourselves. As if somewhere our 5th-grade selves said, “I want to raise children all by myself when I grow up!” Today, I want to address those comments, and there were quite a few, that felt as if the child support I got, “Was for the child” and that a washer and dryer had nothing to do with the children. They felt as if I used the money to purchase something selfish on my part and that I should have spent the money on toys for the children. This blog post is for them and those who think the same. So let’s break it down:

My children don’t have everything, but they have more than some of their friends. I may not have the money for a washer and dryer, but I did have the money for new shoes, birthday gifts, party invites, and school trips. To explain the situation at hand even further, I didn’t receive the child support until two days after Christmas. I received a phone call from He 2 days before Christmas (because I do not keep him from seeing or spending time with his children so he always has a current contact) to inform me the payment was coming and if I would put his name on something for the children. I had already spent over 1k on their Christmas and my shopping was done before December 1st. I guess I’m just proactive about my children like that. But I’d also like to point out that single parents have no choice but to plan ahead when they only have one income to depend on. Generally, getting paid bi-weekly means one check is for the rent and the next check is for the bills. We budget for incidentals as finances allow. Waiting until the last minute means watching disappointed faces on Christmas morning. I’m still teetering on the fence of celebrating this commercialized holiday but for the sake of my children’s happiness, I do it. My second business is seasonal work so my Christmas planning starts in July. I book extra shows, take on second jobs, and look for any opportunity for overtime. While doing this I also had endured listening to my children complain about wearing damp clothes to school because saving money meant not having enough quarters to finish drying clothes the night before. When the delivery people brought that washer and drying into the house this morning, my kids’ eyes lit up just as bright as Christmas morning when they opened that PS4.

So now we’re the low lives when we’re holding up our end of the bargain by being present. When you don’t live the day to day struggle you can assume whatever you want on social media. 90% of the time, without knowing the whole story, you are wrong. But this is not something we should be wrong about. No mother should have to defend how she spends money sent to her in the form of child support as long as it’s not alcohol, drugs, or lottery tickets. If the father were spending the same amount of money in the household you can almost guarantee that the money would go to the house before it would go to toys or clothes. Stop bashing women who use child support for paying the light bill or even her cellphone bill. If the father were still living in the home would these bills not get paid in lieu of purchasing toys? Why should I have to keep this machine running 365 days a year while He gets to pick up and put in a little bit of effort when and for however long he wants to. “He” quit his job after only 4 months of working in 2 years the second week in November so the extra money was a surprise. And the washer and dryer were a surprise for my kids too. And yes, they were told, it came from their dad. But I shouldn’t have to defend what I spent child support money on as long as the children benefit in the process.

Whether the mother has a job outside the home or not, she still does the day to day care in which the father has no participation. Yes, every case is different and there are some women who abuse good fathers, but they are far and few in between. Single mothers get dealt a bad hand and the last thing they need is the village who is supposed to be helping, to also be unwarrantedly judging them in process. It’s not about us and how we feel, it’s about our children. My children have a convenient method of getting clean clothes now and I shouldn’t have to defend that to anybody. Not that I would anyway because I don’t give a fuck what you think. But I feel bad for the mothers who are not only fighting the father for support but are also fighting his family’s opinions that are like these as well. We are women, we are stronger together, stop this shit. Don’t take this behavior into 2020. Happy New Year!