Complete chaos at a gender reveal party in Chicago this afternoon after shots rang out leaving six to eight people  wounded.  Rumors are swirling that mostly children were shot and some may even be deceased but Chicago PD has not confirmed anything as of yet.

Details are slowing pouring in as we find out that as many as 8 people including several children were shot at a gender reveal party in Chicago. One bystander claimed that her ten year old niece had been shot in the leg and was stable, however several more children were shot including a young boy in the chest.

Blogger buzz will update with more details as they come in… 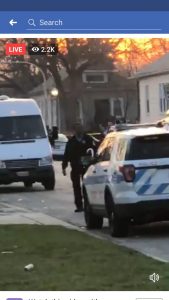 UPDATE: A few people went live on Facebook moments after the events unfolded and you can check out those videos here: