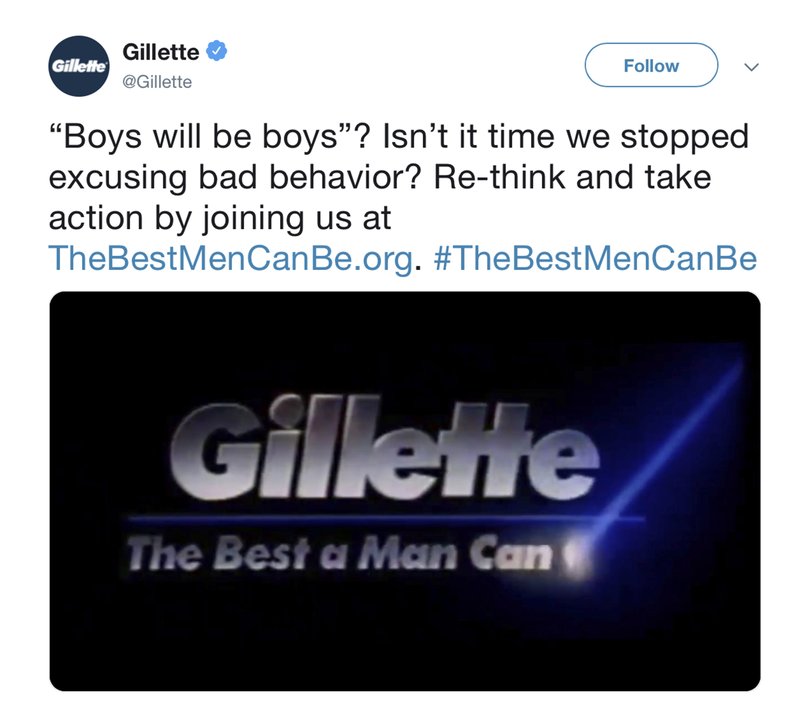 If you thought a kneeling football player caused heads to explode, this years Superbowl ads might just end football as we know it.  Ok, so we know the NFL is too wealthy to allow a sensitive commercial to be its demise, but the commercial definitely has its main fan base up in arms over classification.  To me, it feels like America doesn’t really know nor grasp the concept and definition of Toxic Masculinity.

Gillette released a teaser to its Super Bowl ad campaign this week and while I may have been a bit hormonally emotional, I’m almost certain that the single tear I that I shed was genuine.  The commercial taunted the phrase, “Boys Will Be Boys” as the men in commercial embraced the #MeToo movement by demanding that men take responsibility in ending the stereotypes that caused need for the #MeToo movement in the first place.  It called for men to stand up and hold each other accountable for their actions both good and bad.  It did not sugar coat the situation, nor find alternative methods to boost the male ego into positive reinforcement for change.

The backlash started almost immediately as people began to tweet their disdain for the razor brand.  Men claimed that they felt attacked as this broad blanket of behavior accusations was not not only aimed at them, but had the potential to scar them for life.  It kind of reminded me of all the men out here “scared” to be falsely accused of sexual misconduct.  These also happen to be the same men who have a confused understanding of the Toxic Masculinity they accuse the Gillette commercial of imposing upon them.

Could it be true that Gillette is just following the trend of tackling sensitive topics in their commercial ventures?  Sure, why not?  The numbers are there as it has worked for companies in recent months including Nike’s endorsement of Collin Kappernick.  Granted the the golden marketing data is there, still I don’t believe that is the intention of this company.  The message is clear, “The best a man can get” is accountability so he can be “The best man he can be”.

But don’t let me be an influence, you be the judge