Look I’m going to be honest with you I’m having some computer issues so I am posting from my phone. This would be why you guys haven’t heard from me lately. But no worries the new laptop is on the way this week, howeva…I could not pass up the opportunity to post about this. The other night here in Myrtle Beach my daughter called me from her gig to tell me that Momma Dee was at her establishment. I was wrapping up from my gig when she called. So I raced across town for the chance to meet her. She was there when I arrived with her very sweet husband and politely let us know that she did not want to take any pictures. She was on vacation and she was tired and I immediately understood but was grateful for the chance to talk to her. She went about her way and everyone that was there seem to understand her not wanting to take any photos. No one got angry with her. No one became irate. And it really wasn’t a problem. 2 days later I find a video with Another Love & Hip Hop star with the same request but a totally different reaction. Out of respect for her personal privacy no matter how I feel about how she behaved I will not share her name however Here was her caption for the video: 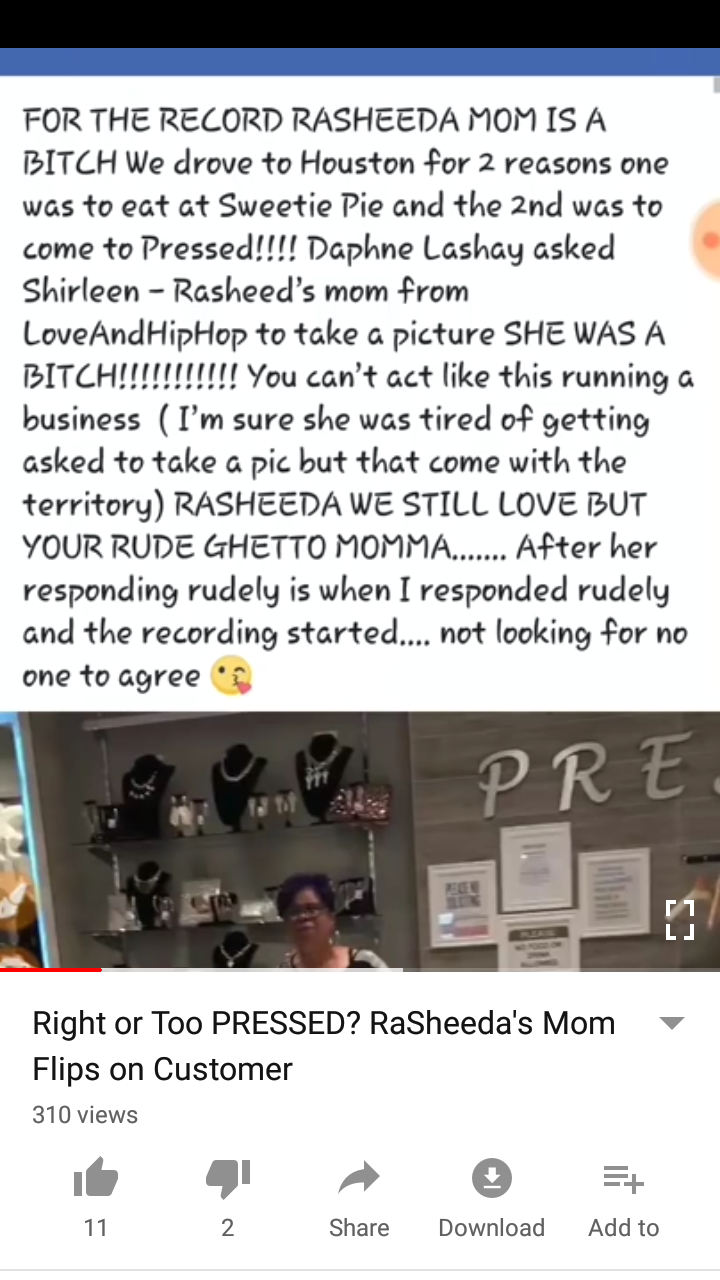 I tried to share the video when it had 1 million views but of course, as my luck would have it, the video was suddenly removed from the original posters page. I will be looking into why in the upcoming days but the woman’s words lead me to believe someone has threatened her with defamation of character and possibly slander.

By the grace of God, I have been able to obtain a copy of this video and I will post it for all the world to see until naturally, someone shuts me down. But before I do, I want to address a couple of things about the women in this video.

2. Black people like you are the reason black businesses cannot thrive in this country. Your sense of entitlement is extra and unnecessary. If you don’t like the rules at Macy’s, you simply don’t shop at Macy’s. You don’t start an argument with the clerk. But because Pressed is a black-owned business for whatever reason you walk in there thinking they owe you something when they owe you nothing but the respect of being a customer. There will be no discounts today.

3. That is her image, her body, and her Fame. She is on television because they pay her to be. She will be in your pictures when you pay her to be. She owes you nothing for tuning in to watch the drama every Monday night @ 9 pm EST on VH1 where that same drama needs to stay. Mona Scott will call you if she wants you to audition.

And lastly, let me come out of character a little bit and say HOW DARE YOU accuse this woman of living off her daughter as she is behind a cash register managing a whole live store. That’s called a job you jealous b******. Get one and learn to respect your elders. You are an embarrassment to black women everywhere and you should publicly apologize for your terrible behavior. For the rest of you, here’s the video If you haven’t seen it…