I have been passionate about music for a long time.  It’s practically safe to say since birth.  Tonight as I came off stage from singing my tributes to some of history’s greatest musicians, I checked my social media to find that one of the greats, was no longer with us.

Some time around the age of 11 I discovered how to operate the radio, the tape player, and the record button simultaneously.  With the aid of dollar store blank tapes, I was able to record all of my favorite music from the radio.  No more waiting to hear my favorite song, I had it at the touch of a button.  That may have been the moment I fell in love with technology too.  I don’t want to get distracted telling you this story because this post is about Mr. Berry.  I made a tape of what I called back then, “Oldies”.  If only I’d have known how offensive that was to my mother I would have never said it.  This one tape I made became my favorite and it had hits on it like, “Joy To The World”,  “Run Around Sue”, and Chuck Berry’s “My Ding A Ling”. 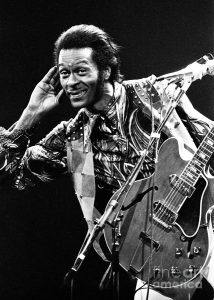 I have always thought that “My Ding A Ling” was one of the greatest songs ever written.  People laugh when I say this, but I’m so serious.  Even at a young age I could decipher the colorful play on words but it was deeper than that.  Chuck was giving the industry that had used, abused, and ripped him off the finger.  And it turned into a #1 Hit in the both the UK and the US.  Chuck once said in an interview that he, “wanted to be a comedian”.  And I found it funny as hell that this man could go anywhere in the world in 1978 and get droves of white women to sing about his penis.   Happily.  Kudos Mr. Berry.  You’re a legend in more ways than so many realize.