So,  I thought this would be easy.   Write about your life.  Write about the day to day interactions that you have.  Oh what fun that will be.  Listen Linda.  I have five children and I run this house alone.   So much shit happens during my day that I honestly think most of you would interested in reading, but I just don’t have the time to record.  I mean, maybe I have the time, but I’m just not coordinated enough to capture it all.  I’m considering a go camera to just randomly record throughout the day and then I can fast forward through it and pick out what I should write about at the end of the day.  That reminds me of an episode of Black Mirror on Netflix where technology can record, rewind, and replay everything that you see and store it in a memory chip that surgically implanted in your brain.   I could win so many arguments like that.

I had to wake up early this morning to drive my niece to an event that she’s learning on in South Myrtle.  When I walked into the kitchen I heard rustling.  The kind of rustling that large insects and small rodents make.  It was like rhythmic tapping on plastic.  I made some noise to see if it would stop as I could not focus my eyes on a source from the direction of disturbance.  The persistent tapping did not stop.  I cautiously moved forward preparing to come face to face with a member of another species only to find that the ceiling was dripping.  Practically a mile a minute.  Seriously, it was raining on my kitchen counter.  Since it wasn’t raining outside I made the immediate connection that the upstairs unit must be flooding and surely the floor would be caving in any minute now. 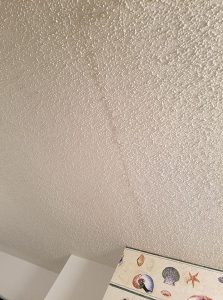 So I did the only thing I could do.  I turned into supermom and delegated authority.   Also known as: Assigning clean up to the kids while calling maintenance as I prepared to chauffeur kids around on my morning off as usual. One trip to South Myrtle and two maintenance guys with flashlights later  the water stops and dries up just a quickly as the bleeding tears of religious statues around the world.  I could have gotten a little extra sleep this morning, but as my life would have it, I didn’t.  I did manage to write this.  And I guess this is going to be as real as realtime blogging gets for me.   Now I have to go to work.  I’ll see you guys tonight on Social Media!